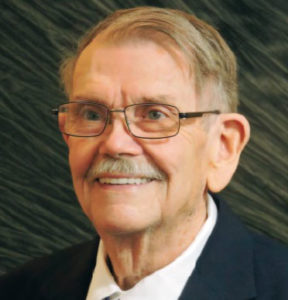 The beginning of Don Moon’s life prepared him for the path that brought him to the realization of a great idea. Moving from home to home, exploring more than one option as a career and connecting with others for the long-term—these life-long influences made a difference in Don’s life. As we acknowledge his life’s work with this honor tonight, we also note the difference he has made in the lives of thousands of others.

Donald L. Moon was born on April 22, 1938, in Wichita, Kansas. He lived with his birth mother in Emporia, Kansas, a middle-sized college town in Eastern Kansas. He was later adopted by Emporia residents, Orval and Ethel Moon, when he was approximately 10 years old. Eventually, he and his family moved to Wichita, Kansas where he began his college studies and met his future wife, Carolyn Powell. Don received a Bachelor’s Degree from Friends University in Wichita and went on to earn additional degrees including a Bachelor of Divinity degree from Nazarene Theological Seminary in Kansas City, Missouri and a Master’s Degree in Philosophy from Indiana University in Bloomington, Indiana.

Don served as a minister throughout his years in graduate school in order to support his young family and taught Philosophy of Religion for several years at Indiana University. He ultimately became the Senior Minister of First Friends Meeting in Indianapolis. His work with Quaker organizations became international in scope when Don was asked to be the Clerk (President) of the Section of the Americas of the Friends World Committee. In this role, Don traveled throughout the world addressing the various concerns of Quaker Meetings and Quaker institutions. He was especially interested in greater cooperation between Quakers in the United States and those in Central and South America and recommended a conference be convened to open greater dialogue among all branches of the Society of Friends across the western hemisphere. Named as president for this undertaking, Don spent three years developing the direction of the conference and served as chairman and moderator when the Conference of Friends in the Western Hemisphere was held in Wichita in 1977.

All Don’s work prepared him well for the next phase of his life as Chief Executive Officer of Foulkeways at Gwynedd near Philadelphia, Pennsylvania. When Don became CEO, Foulkeways was a ten year-old Quaker Continuing Care Retirement Community (CCRC). Foulkeways is recognized as one of the first Quaker CCRCs in the country, becoming the model for many that followed. Don moved his family to Pennsylvania and served as CEO at Foulkeways for 13 years.

During his tenure at Foulkeways, Don, along with a group of Friends (Quakers), became concerned that no lower cost, affordable alternatives existed that provided the financial and health care securities of a CCRC. Neither were there alternatives that provided these guarantees in the individual’s own home. Don set out to define a new way to approach these issues. These ideas, which took form in the 1980s, resulted in what has become Friends Life Care, the pioneer “CCRC without Walls” or “Continuing Care at Home” (CCaH) business model. With over $2.5 million in grant funding, this new and innovative service offering was launched and became operational in 1990. With nearly 2,500 active members enrolled at this time, Friends Life Care remains at the forefront of aging services. The mission of Friends Life Care continues to focus on Don’s original idea of helping members remain in and thrive in their own homes for as long as possible.