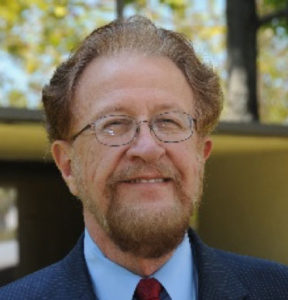 Rev. Dr. Laverne R. Joseph has served as President and CEO of Retirement Housing Foundation for 30 years. During his tenure he helped the organization become one of the largest non-profit providers of housing and services for older adults, by tripling its size to nearly 200 communities in the US and Caribbean and serving 21,500 persons.

Dr. Laverne R. Joseph has served as President and CEO of Retirement Housing Foundation (RHF) since July 1, 1987. Under his leadership RHF has tripled in size and now serves more than 21,500 older adults, limited income families, persons with disabilities, and chronic mental illness in 29 states, DC, Puerto Rico, and the Virgin Islands. He was born on February 5, 1938, near Spring Grove, Pennsylvania, and was actively involved in music at his church and school, including conducting his own 19-piece dance orchestra. He was considering a career in music.

His pastor challenged him to consider ministry, so he enrolled at Ursinus College, Collegeville, Pennsylvania, and received a Bachelor of Arts in History in 1960. His music professor asked him to consider getting a degree in music and coming back to Ursinus to teach. So that summer he attended the Eastman School of Music in Rochester, New York. In the fall he enrolled in Lancaster Theological Seminary, Lancaster, Pennsylvania, and discovered that seminary required a year round commitment. After an intern year in campus ministry at Southern Illinois University, Carbondale, where he met his future wife Ginger, he returned to Lancaster Seminary and received a Bachelor of Divinity degree in 1964, and a Master of Divinity degree in 1974. From Pennsylvania he moved to Chicago to pursue an additional graduate degree in Ethics in Society at the University of Chicago Divinity School. He is an ordained minister in the United Church of Christ (UCC).

In Chicago he and Ginger started attending Peace Memorial Church, which was near her teaching position at Calumet High School, and they asked him to come on board as a part-time associate for a small stipend and housing. In 1966 he was asked to serve as senior pastor of this 1,200 member congregation, a position he filled until 1987. He also served as unpaid executive director of the church’s housing and healthcare ministries and oversaw the construction of two affordable housing communities and a continuing care retirement community.

From 1976 until 1986 he served on the board of Evangelical Health Systems, now Advocate Healthcare. He twice chaired the board and at various times chaired the strategic planning, audit, medical affairs, and executive committees. When his term was over, he was asked to join the board of RHF and shortly thereafter was asked to move to California to become President and CEO.

He frequently addresses professional and service organizations as well as churches regarding various housing and social service programs and issues. He has testified 12 times before US Senate and House Committees concerning national housing and services legislation.

In 1993 LeadingAge presented him with the Meritorious Service Award for his work in advocacy and providing safe, secure, affordable housing for thousands of seniors. He received the Council for Health and Human Service Ministries’ (CHHSM) first and only Advocacy Award in 2002. In 2003 Lancaster Seminary presented him with the Robert Moss Award for excellence in ministry beyond the local parish. In 2006 Aging Services of California gave him their Meritorious Service Award. The LeadingAge Nominations and Award Committee selected him for the 2008 Award of Honor.

RHF is a founding member, and Laverne serves on the board and formerly chaired the board of the National Affordable Housing Trust (NAHT), the nation’s first nonprofit syndicator of tax credits. NAHT has provided more than one billion dollars in funding for low-income housing.

RHF is a founding member, and Dr. Joseph serves on the board, executive committee, and underwriting committee, of Caring Communities Risk Retention Group, a liability insurance company for nonprofits providing housing and healthcare services.

He serves on LeadingAge California’s public policy committee and affordable housing cabinet. He formerly served on the national LeadingAge house of delegates for ten years, the board for six years, and for seven years chaired the housing committee. He chaired the building task force which constructed LeadingAge’s corporate headquarters office building in Washington, DC.

From 2000 to 2002 he served as board chair of the California Association of Homes and Services for the Aging.

From 1984 to 1987 he was a member of the board, treasurer, and chair of the strategic planning committee of the Council for Health and Human Services Ministry (CHHSM) related to the UCC. In 1993 and 1996 he was elected to the CHHSM board and chaired the stewardship directorate until 2001. He was re-elected to the board in 2016.

He is a former board member of the Chicago Community Renewal Society, the Chicago Metropolitan Association of the UCC, and the Kobe Japan College Stateside Corporation.

Dr. Joseph believes in providence. He has never sought a position, but in retrospect has found that every position prepared him for the challenges of the next one.

In grade school, his aptitude tests always resulted in a three-way tie between music, religion, and business, and he has used all three in his ministry. Without influencing their careers, each of Laverne and Ginger’s children pursued his aptitudes. Daughter, Kristen Wilks, is a CPA, son, David, is Director of Vocal Music at a local high school and Music Director at a local United Church of Christ, and son, Jonathan, is Senior Director for a consumer electronics accessory manufacturer. The Josephs have seven grandchildren.

Dr. Joseph continues to lead the RHF mission because of the inspiration he receives from the stories that residents share about the difference RHF has made in their lives.