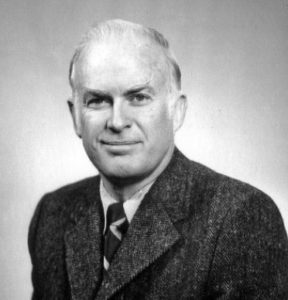 Lloyd W. Lewis was born in Brooklyn, New York, on May 22, 1928. After growing up in Larchmont, he matriculated to Swarthmore College where he met his future wife, Eliza, who sat next to him in their English class during freshman year. Lloyd earned a Bachelor’s degree in 1949 and later he served on Swarthmore’s board for more than fifteen years. On August 18, 1950, he married his college sweetheart, and that union of 49 years until his death produced two children; a son and daughter. Lloyd was an avid bird-watcher and a member of the Society of Friends.

Nothing in the first two decades of Lloyd’s professional career, including stints in a chemical production company and an adult education center, would lead one to expect that he would devote the rest of his life to serving seniors. However, following his career transition, it is likely that the combination of his childhood experiences with helping to care for his grandmother along with his work opportunities at Kendal inspired him to conceive the many initiatives that have resulted in a lifetime of hall-of-fame worthy accomplishments.

In 1971, Lloyd Lewis was the founding Executive Director of Kendal at Longwood, the first community in the Kendal System. Throughout his many years with Kendal, Lloyd’s mission of providing the best quality of living for residents and the best quality work experience for staff was unwavering and led to his recognition as one of the leading innovators in efforts to improve the field of aging services.

During the next two decades, Lloyd’s vision and dedication was instrumental in guiding Kendal into today’s Kendal Corporation, which is among the 10 largest not-for-profit senior living organizations in the United States.

In 1978, Kendal published the first national Directory of Life Care Communities, a result of Lloyd’s realization that an increasing number of soon-to-retire individuals were struggling with pre-Internet ways to find the best retirement community to fit their needs. Lloyd insisted that this directory should focus on providing information to answer the questions that prospective residents should be asking.

In the late 1970s, Lloyd inspired a group of Delaware Valley CCRC leaders and led them in crafting a set of accreditation standards. Focusing on governance and administration, as well as financial and contract transparency, the process was designed to help both communities and consumers measure the performance and value of individual communities within the proliferating CCRC industry. Lloyd’s small group of CCRC CEOs shared their idea with LeadingAge (then AAHA), which broadened the program nationwide in 1985 under the name of the Continuing Care Accreditation Commission.  From his early days guiding Longwood, Lloyd joined with Jill Blakeslee to share a vision and mission to provide restraint-free care. They had a substantial impact on the reduction in the use of both physical and chemical restraints nationwide. Together they carried the program forward, educating staff and working on a national campaign.

In December of 1989, Kendal, led by Lloyd and Jill, joined the Senate Committee on Aging in sponsoring a symposium, “Untie the Elderly: Quality Care Without Restraints,” at which Jill spoke. “Think about yourself as you grow old,” she told participants. “Is that what you would want?”

Major federal laws addressed the elimination of restraints in the care of older citizens. Changes in practice soon followed and marked a major milestone in Lloyd’s commitment to improve the experience of living.

Lloyd’s hand is also seen in the Pennsylvania Restraint Reduction Initiative (PARRI) which was introduced by Kendal in 1996 and has been funded by grants for twenty years. PARRI has been praised for providing leadership, direction, and technical support to over 700 long-term care providers throughout the Commonwealth.

Kendal Outreach, a subsidiary of Kendal, evolved from their commitment to restraint-free care. It has been sharing Kendal’s approach to quality care since 1989. Today, the impact of Kendal Outreach, a result of Lloyd and Jill’s dedication to a just and noble cause, extends around the world. Vision, dedication, and accomplishment were consistent traits throughout the professional life of Lloyd Lewis. His leadership inspired generations of professionals in careers focused on improving the experience of living for older citizens. With his 2015 induction as a charter member of the Continuing Care Hall of Fame, Lloyd’s legacy continues to grow in line with his prior honors—establishment of Kendal’s “Lloyd Lewis Fund for Promising Innovations” in 2007, creation of LeadingAge’s (AAHSA) CCAC Lloyd Lewis Excellence in Practice Award in 2001, and the recipient of LeadingAge’s (AAHA) Award of Honor in 1987.