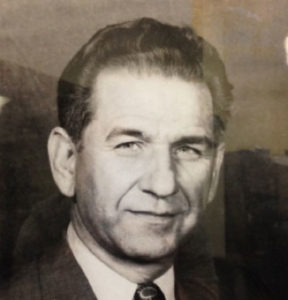 Rev. Paul White is widely recognized as a pioneer in the senior living field. During his 32 year tenure (1960 to 1992) with  Presby’s Inspired Life as the first President, he applied his  vision to utilize the CCRC model and Affordable Housing platform  to create a preeminent organization that has grown from serving  130 to over 3,500 seniors in all economic levels today.

The Reverend Paul A. White is President Emeritus of Philadelphia Presbytery Homes (PPH), now called Presby’s Inspired Life. Presby is extremely blessed that Paul was at the start of this new and exciting field of continuing care.

Paul was born in Ashland, Pennsylvania on March 28, 1927. His parents Hayden and Mae White had four sons and Paul was the third child. He attended Ashland Presbyterian Church and was a graduate of Ashland High School. He married Betty Burnett on December 18, 1948. They had two children, Dale and Ruth, and three grandchildren. Paul passed away on December 18, 2013.

Paul guided Philadelphia Presbytery Homes Inc. through its first three decades. His commitment to the ministry for older adults, his focus on financial stability and his innovative leadership style inspired the entire organization through his accomplished tenure.

Beginning as Executive Secretary in 1961, he ultimately went on to become President of Philadelphia Presbytery Homes. His insightful, dynamic vision was instrumental in providing new retirement options for senior adults in the Philadelphia region. He helped to set the standards for responsible retirement community administration regionally, and nationally. His desire to help others, along with his innate finance skills were compelling factors in the success of the Presby Homes mission.

When Paul joined Philadelphia Presbytery Homes, the organization owned three communities: Rosemont, Broomall and Wayne Hall, serving a total of 130 residents. Few communities then recognized the need for seniors to retain control of their assets and their independence, while receiving more services as life spans lengthened. Rydal Park expanded continuing care options on one campus, and with Rosemont, pioneered the concept of an active retirement lifestyle. Paul worked for many years to expand Broomall Nursing Home and transform it into one of the first church sponsored nursing homes of its kind in the greater Delaware Valley. His passion for the ministry was palpable. Paul retired from Presby’s Inspired Life in 1992 after 31 years of inspiring and dedicated service.

In 1981, Riverside Presbyterian Apartments became the first affordable housing community, enhancing the scope of services. While continuing to develop its own services and communities, Presby Homes also branched into providing management services for other organizations.

Paul was a founder and charter member of the Pennsylvania Association of Non-Profit Homes for the Aging (LeadingAge PA) and served on the Board of Directors as President (Chair). He also served on the Board of the American Association of Homes and Services for the Aging (LeadingAge) and was a member of their Continuing Care Accreditation Commission. As a consultant, he had assisted other retirement organizations.

On the night of his retirement Paul remarked, “At first, we could never have dreamed how this organization has grown. It was mission-driven to help people stay independent, and had wonderful Board and staff to help make it happen. Now we are able to serve people of all socio-economic backgrounds and solve their retirement problems. This work has been immensely rewarding.” Upon his retirement, Paul had developed four retirement communities along with 10 affordable housing buildings.

In 1997, Philadelphia Presbyterian Homes Foundation decided to honor his legacy by establishing the Paul White Fund for Innovation to provide for the continuance of excellence and improvement across Presby communities. It was resolved by the Board of Directors, that the Fund “would serve as a revolving fund of contributed money, which may be made available in the form of grants or loans by the Board of Directors of Philadelphia Presbytery Homes Foundation, to address priorities identified by Presby including, but not limited to providing funds to explore innovative ideas or seed new projects.” This Fund is alive and well today and is helpful to Presby for this purpose.

The Board of Directors of Presby’s Inspired Life joined staff, residents and partners in mission in recognizing Paul White’s outstanding leadership in the field of aging services on May 27, 2004. He was awarded the golden anniversary “Lifetime Service Award.” The plaque read “Presby Homes & Services has grown and thrived because of your passionate personal vision, your innovative programs, and your commitment to compassionate care.”

A library dedication ceremony, honoring Paul White, the longest serving President of Presby’s Inspired Life, was held on September 17, 2015. A library, which currently resides in the historic mansion on Rosemont’s campus was renamed “The Rev. Paul A. White Library.” Members of the White family, including his wife Betty, children and grandchildren were in attendance to take part in the special ceremony.

Under Paul’s leadership, Presby expanded its Continuing Care Retirement Communities and opened its first affordable housing community for seniors, Riverside Presbyterian Apartments in 1981. Paul’s visionary leadership continued to guide the organization long after his retirement. His profound love and knowledge for the ministry helped to shape the strategic plan of the organization, moving into the 21st century. He gave so much to ensure that seniors of all socio-economic levels had access to quality care and retirement options. His leadership set the foundation for what this organization is today, servicing over 3,500 residents in 39 communities. Presby’s staff, residents and stakeholders alike are the beneficiaries of his work and dedication to serving others.