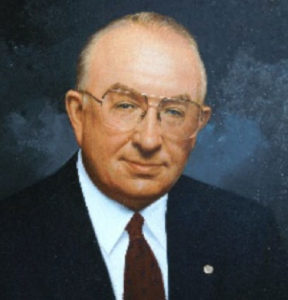 As a longstanding American Baptist, Rev. Dr. Richard E. Ice’s passion was to grow and sustain its ministries. He was a dedicated and innovative visionary leader who opened doors that no one could have dreamed possible, leaving an extraordinary legacy that continues to influence senior living services, education, social justice, and American Baptist leadership.

Dr. Richard E. Ice was President Emeritus of American Baptist Homes of the West. He retired in 1995 after 23 years as President and Chief Executive Officer. At the time of his retirement, ABHOW consisted of 33 retirement communities and nine health facilities providing care for some 4,700 residents and employing more than 1,650 persons.

Dr. Ice was born September 25, 1930. He was active in his local Baptist church and Boy Scouts, achieving the rank of Eagle. He was an alumnus of Centralia College, Linfield College, Berkeley Baptist Divinity School, and Harvard’s Advanced Management Program. He held honorary doctorates from Linfield College and the American Baptist Seminary of the West.

He married Lucille Daniels in 1955 and began his professional career in banking. Following graduation from seminary, he pastored a church in Seattle. He then served American Baptist Churches, USA, in several positions, including vice president. He served on the boards of Linfield College, the American Baptist Seminary of the West, the Graduate Theological Union, the Baptist Joint Committee for Religious Liberty, and the Ministers and Missionaries Benefit Board.

He served as a council member for the Boy Scouts of America, during which time he acted as Chaplain for two National Jamborees. He was a Trustee of Bacone College and Murrow Indian Children’s Home in Oklahoma. He was president of the American Baptist Homes and Caring Ministries and served on the Board of Directors of Minister’s Life. Dr. Ice was Chair Emeritus of the Board of Trustees of Linfield College, Trustee Emeritus of the Graduate Theological Union in Berkeley and Trustee of California/Nevada Methodist Homes. He was a commissioner for the Continuing Care Accreditation Commission in Washington, D.C.

Dr. Ice joined the ABHOW board in 1970 becoming president in 1972, a position that was fitted to his temperament and training. His business acumen enabled him to position ABHOW as a leading nonprofit provider of senior housing and health care, while his theological and philosophical skills made him an articulate champion of older adults and mission-driven enterprises.

Dr. Ice knew how to manage money and prepare for the future. He led ABHOW through extensive expansion in the 1970s and ‘80s. An avid fundraiser, he helped grow the ABHOW Foundation’s assets to more than $40 million to support ABHOW residents who run out of funds.

At times when financial resources were scarce if available at all, Dr. Ice found ways to redevelop ABHOW’s older CCRCs and they remain financially secure today. Where other non-profit leaders would give up during these times, Dr. Ice led the organization through 19 years of enormous challenges in developing a new CCRC. Today it is a flagship community because he fought a noble battle that he led in a self-less, dedicated, stubborn, loving, relentless and undaunted way.

Throughout his career, Dr. Ice played a key role in the development of the senior living profession by connecting ABHOW with similar nonprofit providers. He regularly shared his expertise with regional, state and national trade associations engaged in senior housing, health care and long-term care financing.

His peers saluted him with the Award of Honor and the Meritorious Service Award from the American Association of Homes and Services for the Aging, known today as LeadingAge.

“Dr. Ice was an early thought leader and entrepreneur of the nonprofit sector,” said Larry Minnix, former president and CEO of LeadingAge. “He was particularly known for helping colleagues and a subsequent generation of leaders to know and uphold values on which we were founded. His good humor was an ingredient in every constructive association meeting that he was part of.”

He traveled extensively throughout the world. He testified before state and federal legislative committees on health care and housing for the elderly. He received the Distinguished Alumnus award from Centralia College, the Merit Citation from the American Baptist Homes and Caring Ministries, and the Distinguished Baconian Award from Bacone College. In 2011 Dr. Ice was given both the Religious Freedom Award and the Dawson Religious Liberty Award.

Dr. Ice touched thousands of lives and left a legacy that will be felt for years to come. Along with his numerous contributions to the senior living profession, he will be remembered for his intellect, wit and generosity.